Hotels, forgetful chapels mostly.  Dispassionately functional, (which is fine of course,) but make a man lonely – far away, listless.   This recent one, the Accor in Glasgow, French, and much like you would imagine in the large part, though the room had a separate toilet cubicle.  A wee “wee” cupboard; slate grey walls, hover pan, hidden cistern. A single down light positioned so it perfectly illuminated your lap when you sat on the can. My lack lustre nob, spot lit, like a nervous debutant chanteuse. The glowing junk of an increasingly doughy man evacuating in a windowless cupboard miles away from his wife and home.  Glum.

I peered at the wall’s only feature, a rubber door stop at eye height.  In its centre was the screw that held it, and there, Madames et Monsieurs, on the head of the screw, was something remarkable.  Right there, below the "x", etched so tiny, was the smallest, tiniest letter “w” I think I ever saw. “W” for William. It’vs the little things that make a stay isn’t it, the little things

(although it could have been an m) 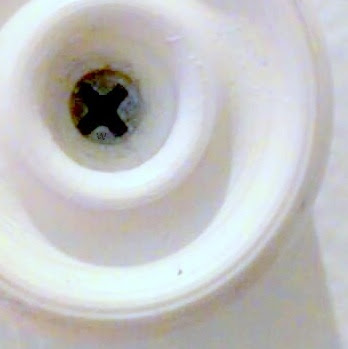